A Tribute to Lal Bahadur Shastri 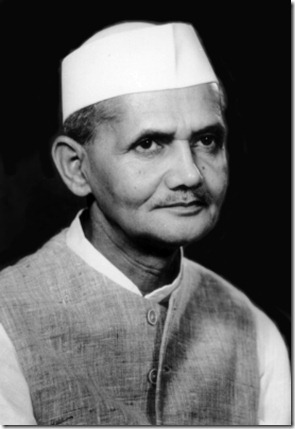 Lal Bahadur Shastri, the second Prime Minister of India, born on 2nd October 1904 (same birthday as Mahatma Gandhi), took over office at a crucial and precarious time for India. With the blow of 1962 Indo-China war exposing India’s then weak defenses and Pakistan making advances in Kashmir with the latest tanks, Shastri had a difficult job in hand but he proved to be the best person to handle it. Unlike his predecessor, Shastri was not hesitant in applying force and aggressive tactics to deal with the hostilities.

Honesty, integrity, hard work, determination, persistence and strong leadership defined Lal Bahadur Shastri and that is reflected in some historical facts about him:

“If Pakistan has any ideas of annexing any part of our territories by force, she should think afresh. I want to state categorically that force will be met with force and aggression against us will never be allowed to succeed.”

To motivate farmers and soldiers at the time of food shortage and war:

What can our current political leaders learn from him?

(PS:- Comments from readers complete my post. So please do read them)

Thank you for the informative write up @A! Glad to know about him.

A man of great courage,will and integrity .One of the most honest leader that our country ever had.Back in school i remember reading a chapter that said that once his wife had not enough money even to buy a pack of Sindoor (vermilion)- and look at the number of corruption-scams in which our politicians are involved today.

He is the ideal man to be in politics. I think the fact that he was left with nothing in hand should be not mentioned. Not that they are not worthy, its just that it gives a reason not to follow his path. Nice write up.

How I wish we had few more of him to lead the country through these difficult days. I had a chance of being associated with his son,who is equally upright.

He was decisive especially during the war and personally I prefer his leadership style to his predecessor.

I recall reading his story of crossing the river in primary school.

We can find such honest men only in our history books

hmmm...no comments on this one as it is against pakistan :(

" There are men & men
Every stone is not a gem
Leaders there are everywhere,
But like Shastri are very rare ! "

These lines were written by us in school days, when we were to write an essay on "My Favourite Leader "
-and they hold true to this day !
You have done very well to remember and pay tribute to this true son of Bhatarmata and an epitome of virtue , honesty and uprightness !

I admire Shastriji along with Nehru, Sardar Patel, Gandhiji and so on. It is uplifting to read about the leaders of those days. It is a sad state that just 2-3 generations down the line, the morals have degenerated immensely. If you have not read "India After Gandhi" by Ramchandra Guha, then give it a read. It is an outstanding read about the history of our country after independence that we did not study.

The most lovable leader of all. The present leaders can learn nothing from him, they have become such worse characters, even to hear them utter the names of such good people is a shame.

How we need such leaders today...I am glad you wrote this post.

Honesty and integrity - something sadly lacking in so many of todays world leaders.

Thanks for remembering him...he was a gr8 leader who didnt garner the kinda attention that was given to the likes of the Nehrus and the Gandhis.

Defying Dowry in the 1920's should have been a litmus test for his character. Once he did that successfully, he would have obtained the power to defy other evils eventually. Its like a training/testing ground, actually.

Enough of satire. Its great that you have written about him Amrit. How much the country wishes that one person like him was there to rule the country today...

Guess what would be India's position today if we have same leaders now?
I bet it would be number one.
Unfortunately it's hard to find such people and even if we hav few people lik them,they are thousands of people to remove their traces.

YEah if only we had some leaders like him .. a few more and our country could have been a great country

Lal Bahadur Shastriji was the best Prime Minister, I feel. He would have handled the current situation of terrorism better than the current PM.

I was in school during the Indo-Pak war and we used to use the slogan 'Jai Jawan Jai kisan' after our prayer everyday and recite the National Pledge too! All of us used to skip Monday night dinner because Shastriji asked us to do so! No other leader would gain that much respect as Shastriji did in the future in our country.

Thanks for reminding my favourite leader, Amrit!

while i was reading this, i was thinking exactly the same thing that you mentioned in he last line, A...new age politicians have become a symbol of dirt and disdain!

informative post
one of the best politicians India got

wow this was a great write up- thank you for enlightening us. He does sound like a man of high integrity- and if anything our politicians of today need to learn a bit more about that.

Hats off to such great personalities.

Great write up on a great personality!!-Whirlwindthoughts (Swetha Amit)

Lal Bahadur Shastri had the right priorities of building India by building men of great character. He led by setting exemplary examples.
One day in future historians will say, "Only Lal Bahadur Shastri was correct and rest of the leaders were all corrupt".

Every Indian is familiar with "Jai Jawan, Jai Kissan" slogan coined by LBS.

nice to know abt lal bhadur shastri..Great men...
who ruled the country..no barriers ..true to every word..unlike politicians of today..
thanks for sharing.

I like lal bahadur shastri a lot, he was an honest man totally unlike today's politician and would have been a better first prime minister than nehru

Such an inspirational person and politician. We need people like him today!

What ever i know about him i like his simplicity the most....

This post reminds me of the lesson I had about this great personality while in school. And 2 things about him is etched well in my mind. Crossing the river and resignation after the train accident owning the responsibility. We do not find leaders of this calibre these days. Nice befitting post for October 2 nd.

Really great and inspiring speech. I slept through my history lessons. Thanks for reminding me that we need to be proud of our history and where we come from.

interesting read and over all nice write up, my name is vinay i work for a magazine called enlighten india, lemme know if you are interested in getting your articles published.