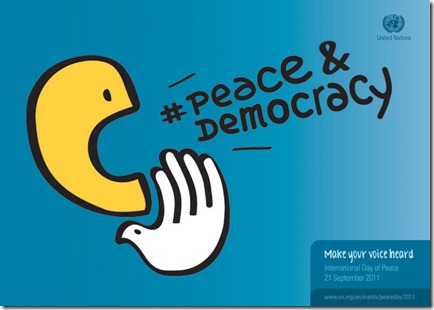 United Nations observes 21st September as International Day of Peace. It is a day to highlight and emphasize the importance of peace around the world. It is a day of non violence and ceasefire. It is a day to promote harmony in the world that continues to face the turmoil of major conflicts in Afghanistan, Pakistan, Libya, Iraq and Palestine and a regular threat of terrorist attacks in various parts including India.

“Peace and Democracy” is this year’s theme. Stressing the importance of democracy, the Secretary General of UN, Ban Ki-moon considers democracy crucial for human rights and for resolving differences besides empowering people.

Some question the relevance and effectiveness of the UN and International Peace Day but any effort for creating awareness and promoting peace shall be welcome. Achieving non violence and peace is not a onetime endeavor; it is an ongoing task with a clear objective to create an environment of resolving conflicts through political processes without using violent means.  Often armed conflicts result in loss of lives of innocent men, women and children - loss of lives of law abiding and hardworking average but unfortunate humans. Any attempt to save lives of innocent citizens shall be received with open arms. As part of the UN Peace Day campaign in Afghanistan, 1.6 million children were vaccinated in 2008 and 1.2 million in 2009. But saving lives of fellow humans is not responsibility of just one organization; probably it is collective responsibility of human race.

May be supporting the initiatives of the UN is a contribution to this great cause.

What do you think?

A, Thanks for bringing this to my notice. I was not aware of such a campaign. Yes, Peace is what we need. I completely agree its a collective activity not a responsibility of a single individual. Try and do a bit to the society and see the change come through.

well..its very good to have peace in the world and every little effort in that direction is more than welcome...but as everybody knows what UN means and what is their notion of peace.... unless and until we have an autonomous and democratic UN, the idea of peace well be illusion at best....

Not very fond of the UN. But, tell me what is it that we can do as individuals to bring about peace everywhere? How exactly do we support UN in this?

I 2nd Bikramjit, i was clueless as ever!! Thanks for posting abt it.

Informative...peace is the only way forward.

Thanks for the reminder, as if I "forgot". I had no clue either :)

Now that you mentioned, wishing Peace to all!

again I also had no idea about it, thanks to you I do now :)

yes we need to spread awareness.
article on antimatter i posted.

Thanks for sharing it was wonderful to know abt this!

I learnt new information today, thanks! Unless we take effort unanimously, nothing is going to happen.

I never knew about International Peace Day! Thanks for sharing the information.

Good to know.Even i was not aware of this information.Thanks for sharing ,i am going to visit other related links that you shared.

Honestly wish there is more peace in the world today!! -Whirlwindthoughts (Swetha Amit)

Peace and democracy both are the need today and important too, but sometimes peace is found thru armed intervention only.

I think by being a good citizen ourselves we always contribute to everything good in life.

Informative post...looking at the present scenario i feel we need more "peace days" to be observed during a year to bring more peace into the world.

Frankly it is news to me.
For peace, let there be some action, not only words.

A very relevant post considering the situation around the world now. You are right, saving the world is not the duty of just one organisation, it need to be a collective effort.

Thank you for bringing this to my attention- that today is Peace Day! We definitely need more peace in the world- and it is not just an absence of war or conflict- but a fulfilling life. Definitely this goal should be a collective effort- not just by one specific organization- although it takes someone to spear head such things...and so it is always good for days like today- Peace Day- to be reminded what we are striving for!!

Thanks for bringing this to our notice. We, at home, are more bothered with hike in petrol prices & Sikkim earthquakes.

Need to spread this.

peace packed post from a peace lover..gr8 yar..cheers and wishes

I don't know why, but I didn't have a good opinion of the United Nations - I always thought it was controlled by a group of elite nations. But I am sure it should be involved in some humanitarian measures like vaccination,etc which is always good.

This is an informative post. Many a things that I did not know about.

I may be late to comment, but glad! I never even knew such a day existed! We definitely need to promote and create awareness! Thanks for sharing this info.

I wish Peace for every one ! I wish everyone to wish the same for everyone else..somebody has rightly said."wars are created in the minds of people so ..WE NEED PEACE OF MIND:-)

Peace is what we all need the most...