Delta Computer Outage and My Night at Atlanta Airport

Most of you probably read about Delta Computer Outage on Sunday Jan 29, 2017. I was traveling on that night with Delta 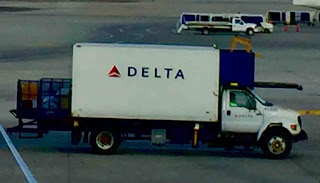 The ordeal and frustration of the passengers were clear. Most kept calm and accepted the situation. Some were visibly angry. The lady on the wheel chair probably had the most difficult time in the process.   Another lady’s eyes were totally red. She asked the customer support for her checked bag because she needed her medicines. Customer support did not appear to help and the process appeared unclear to me.

Ironically, earlier at night in midst of computer failure, on the crowded terminal, very aggressive Delta sales folks were asking passengers to enroll in frequent flyer credit card for double mileage. If there was a program where I get money for the sitting in a still plane, I would have earned a lot that night. I wish Delta focuses on Services and Operations aspects instead of selling mileage program.
Posted by Amrit at 2/05/2017 12:07:00 PM