A Journey from Sikh to Singh 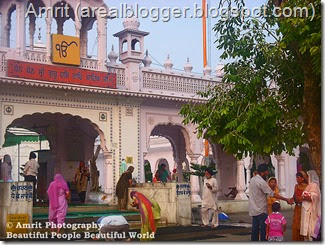 (Article contributed by one my close friend Dr. Umesh Gulati. Dr. Gulati writes on several subjects and simplifies spiritual teachings for common men like me.  His articles are published in various magazines.)

Vaisakhi or Baisakhi festival is celebrated all over India; it usually occurs on April 13, but once in 36 years, it occurs on April 14. This year Vaisakhi will occur on April 14. In Assam, it is called Rongoli, Nab Barsha in Bengal, Puthandu in Tamilnadu, Vishu in Keral, and Vaishakh in Bihar. In Punjab, it is called Vaisakhi. It is essentially the beginning of the harvest festival. But it is more than the harvest festival; the most important about April 13 is that it coincides with the birth or creation of Khalsa.

It was 13 April 1699, the day of Vaisakhi (or Baisakhi), when 800 Sikhs from areas ranging from Dhaka (now the capital of Bangladesh) to Kabul had gathered at the request of Sri Guru Gobind Singh at Anandpur Sahib. The guru entered the assembly with the naked sword in hand and said: 'I need a head. Who is willing to dedicate his life for the sake of the faith?' There was complete silence. Guru Gobind Singh repeated his demand three times. Then with folded hands arose Daya Ram from Lahore and said, 'I am willing to sacrifice my life at your holy feet.' The guru took him inside the tent; there was a dreadful shriek as if the guru beheaded him.

Then the guru came out of the tent with the sword dripping with blood. Once again the guru made the same demand of having a head for the sake of the faith. This happened five times and five devotees dedicated their heads. Each time, the guru came out with a blood-soaked sword. The other four who sacrificed themselves were: Dharam Das from Delhi, Himmat Rai, a cook, Mohkam Chand, a washer man, and Sahib Chand, a barber.

After this when the guru came out of the tent, it was a different sight altogether. The dedicated disciples, whom the people thought to have been beheaded, came out wearing out the same type of attire of blue color as that of Guru Gobind Singh. The guru then introduced them to the assembly, saying, 'they are my five beloved ones, the pure, the Khalsa.' After this introduction, they were baptized with Khande di Pahul, meaning, nectar prepared with the double-edged sword.  Five hymns, namely, Japuji, Jaap Sahib, Chaupai, Anand Sahib and Swaiya were recited.

In addition, the guru gave the five disciples the likeness of his own personality having beard, long hair, and turban on. All of these five were administered baptismal water (amrita) from the same bowl, thus eradicating the distinction between high and low, rich and poor, and caste and creed. Guru Gobind Singh declared that henceforward, the epithet Singh (lion) would be used as their surnames. The baptized ones became members of a common brotherhood. In a similar way, the women and girls were given the common epithet Kaur (lioness).

The baptized ones were renamed as Bhai (brother) Daya Singh, Bhai Dharam Singh, and so forth. Their parents were Guru Gobind Singh and Mata Sahib Kaur (the wife of Guru Gobind Singh). The place of their rebirth was to become Gurudwara Sri Kesgarh Sahib in Anandpur Sahib. After this ceremony the guru requested his five beloved ones to baptize him as he had baptized them. After this baptism, he was renamed, and became Gobind Singh, from his previous name Gobind Rai.

Thus Gobind Singh himself became the disciple as well as the guru because he had invested all his powers in the collective leadership of his beloved Khalsa-the five beloved ones (Panj Piyaare). It is therefore said that there is no other example of a guru becoming the disciple in the history of the world.

Guru Gobind Singh composed a hymn in praise of Khalsa that essentially means this: 'The Khalsa is my own form and I live in Khalsa. Khalsa is the very life of my life and the very soul of my soul.' It follows that Guru Gobind Singh created Khalsa in his own image and raised its collective leadership to a unique pedestal of democracy. When he said, 'I am born for them, to live among them,' it was the psychological and spiritual strength of the guru that was flowing through the baptized ones.

Along with these two types of strength, the guru gave the people a form and uniform also. He made it imperative for the Singhs to use the five ka-kaars, or five symbols beginning with the sound ka. This was done to make their appearance distinctive at the physical level as well, and reminded them of belonging to the community of lions.