Answer to "Guess what is this picture" and a difficult question 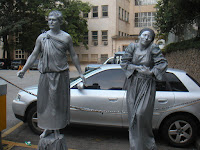 Yes! Everyone got it right. It is a picture of two live human beings enacting as statues to earn a living. In Rio de Janeiro, a city of oil, media, and telecommunication companies and with the largest recipients of tourists in South America, they stood like still images in a hot, humid and sultry summer day near a famous monument to bring in some cash. Unfortunately we have millions of people like them in India too.

This brings up a difficult question in my mind.

The Indian community in the USA raised and spent thousands of dollars to install statues of already famous, well respected and beyond prizes Mahatma Gandhi, in several metropolitan areas of the USA including one in Raleigh. Assuming Gandhi could see us, the thoughts in my mind are:

“Would not we make Gandhi happier if we use the same money to uplift the poor so that they don’t have to enact statues? Would not the father of Indian nation approve spending the same money to feed hungry children instead of making his statues? Would not we make, the theist saint who prayed in his Ashram, proud if we use the same resources to educate underprivileged instead of constructing buildings to worship the God, which presumably exist everywhere?”

Its not a difficult question at all. The answer is obvious. Mahatma would have been really happy to see his dreams realized with the help of people who could make it happen instead of installing his statues all around. You said it just right!

What a wonderful thought :)
Indeed world would be a better and happier place if money and all other resources were more equally distributed amongst everyone.

Thoughtful picture and thoughtful questions. I will be asking lots of tough questions to myself.

I would like to help poor people so that my fellow human beings do not suffer from hunger.

I agree with you. We spend so much money on wasteful things, when we could be helping those who really have needs, the basic needs. I am thinking not of these sculptures but of politicians and how much it costs to run a campaign. So much wasted money--and for what?!

There is an award waiting for you. Please visit my Blog and pick it up. Thanks.

So true, that would be the only fact thats going to make our father oof the nation happy, then the name engraved below the statue...donated by....that makes the people who donates happy and all this is done for their happiness...i believe

Very thoughtful. I agree. You are better than many, at least you thought so.

You can always initiate a thing or tell others to do. Sometimes people do not realize it. There are so many ways to make things better.

I do my bit, whether anyone is with me or not.

Excellent, i am with you and agree with you.
I feel that the people who do not follow the leader always build the statues.

As for the statues- I have a young friend who do this 'living statue' thing here in Seattle- http://garagevoice.com/2009/09/living-statues-in-the-seattle-times/

As for the tough question- I do think there are so many priorities we have all mixed up.

Thanks for the comments. I was out of country and did not have access to blog and hence could not read or reply to most of the comments.

It seems like most of you agree with me but Anjuli is not not sure.

I was expecting some people to disagree with me but probably they did not leave any comments.

I don't feel too bad about the people who enact live statues. It is much much better than the healthy human beings who shamelessly beg in the streets of India.

I once came upon this little lad who was begging and told him, if he comes and works in our farm we can pay him a decent meal and a good salary. I was taken aback by his response that he actually works on weekdays and on weekends when he doesn't have work, he goes begging...

The best thing to do is to introduce the dream in their hearts to live better; to look beyond their financial needs, to make them a better being...

If one is honest, there is nothing stoppoing him from achieving higher goals! If they come across any, sure there are always willing people to give them a hand.

Building a honest nation is all we can do to repay what Mahathma Gandhi did for us. What say?

That is a different perspective. I am glad you stated it here. Thanks

Sad indeed!!
BTW, NRIGirl ji, though you give a different viewpoint, I have a counter-point to that. Although these statue-enacting people are better than beggars but why are they compelled to do even this?
I mean, as a society, isn't it shameful for all of us to find a part of our society so helpless to find living in such conditions and types of works?

What do you think is the solution here? What really is stopping them to live differently? To work with their hands to better off their lives? I guess it is the "help" they receive at this state.

What would be a true help we can do for them? I would say helping them think better will do the trick... Where to start, no clue...

Posing like statue with artistic makeover is art and these people have chosen to make money by displaying their artistic abilities and patience...It is extremely hard work but then they prefer to do so must have good reason..may be because if they choose to work they may not get paid as much as they are rewarded by this hard work.In India we have various types of artists on the street making money by displaying their talents...This is fine with me. I agree with Nrigirl.

But healthy people begging is wrong...again helpless handicap person begging is fine for me...Healthy person pretending to be handicap is wrong and we have huge number of such beggers in India...There are different types of begging and can be justified differently...It is complex social problem and need aggressive rehabilitation which is not possible in corrupt mean world.

I am against placing new statues..we have had enough statues all over the world...In last one decade we are facing various serious problems...all unnecessary spending need to be diverted to solve those problems...priorities need to be fixed...and statues are no way going to bring any reform...unfortunately we will end up venting on net..this rarely brings any reform.

Teach me how to 'fish'. I agree. But for basic education, we need to have money for the needy people.

Welcome and thanks. That is the exact point I am trying to make here.

Thanks for long comment. I did not see any art in standing like statues. I felt very sad for them. There was no set rate. Essentially they were making faces for bystanders so that bystanders throw some money.

With regard to venting, I read the following quote on 'iphrase' yesterday

Sure we cannot change the world but we can control where we donate money. Reading your opinion, I don't think you would donate money to build statue but most likely for education of needy children.

A: The Government of India offers free education till the XII standard, in local medium of language.

Is there really anything more it can do?

Am I missing something?!

Sure Indian Government offers free education. But India's literacy rate is 66% where literacy is defined as basic reading and writing skills.

Few key reason for even missing basic literacy skills for 34% of population:-

1. Families don't send children to school as children earn income at that time.

2. No money to buy text books.

4. Children of lower caste are denied admissions in some schools.

5. Even if they have money, girls are not sent to school (even today) as girls are considered fit to work only at home.

These problems exist in villages and in poor states.

Kerala is excluded from these. Kerala has the highest literacy rate.

Well Mahatma Gandhi unlike Mayawati never asked to put his statues across. Nice blog. keep up the good work:)

Thanks Numerounity. I agree with you.