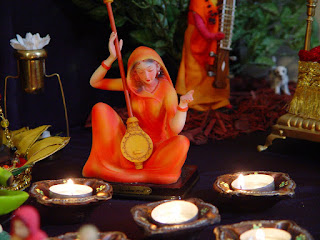 Inspired by an article on Chinese tea party custom by a fellow blogger Anjuli, I thought of a post on an Indian tradition that I recently learned.

Indian festival of Dasra or Vijaydashmi, marked on the tenth day of the Hindu autumn month Ashwin, symbolizes victory of good over evil. Celebrated all over India, various regions have their own legends and festivities associated with it. Mysore relates Dasara with the Goddess Chamundeshwari killing the demon Mahisutra after nine day and nights of battle preceding Dasara. Following this tale, these nine days and nights are considered auspicious and called Navratri. In Mysore, the Navratri festivities entail display of beautiful dolls in the houses and therefore the festival is also referred as the Doll Festival. Our family was invited to be part of Navratri Doll festivities by a fine couple here in the USA. 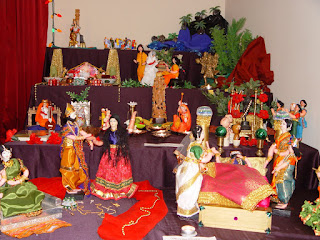 Devotion being the theme for 2009, the whole 4000 Sq feet house was decorated with stunning dolls of various Hindu Gods, Goddesses and characters of Hindu scriptures. Looking at the beautiful dolls, it was clear the hosts spent several months to put together these dolls. Constructing the key personality, surroundings and the atmosphere around it required planning, systematic effort, dedication and variety of skills like sewing, art and craft.

Putting hearts and souls in creating the amazing artwork, my friends are keeping this tradition alive, though they are thousands of miles away from Mysore.

The pictures tell the complete story

Nice one. Looks like North and South Carolina are very much into Navaratri or Golu (Tamil).
We were in Greensboro for the last year's navratri celebrations. Please read my post on this published on October 15, 2009. Thanks.

Beautiful!! In South India, esp in TN, its called "Golu". These dolls are accumulated over years and passed on, preserved and show cased once in a year. Heart and soul goes into this. Thanks for the photos, vibrant and rich!

Definitely the pictures do tell a story .. and its true about our rich traditions .. hope we carry them on and the next generation too carries it on and on ....
Beautiful ....

Beautiful pictures! I too have attended doll festivals here in Dubai while growing up.I used to love the dolls arrangement, the smell of agarbatis, the prasad and the non- stop carnatic music sung by my Tamilian friends. Thanks for bringing back those memories. :)

Beautiful art work that wonderfully portrays the traditional values :D
Thank you for sharing these :)

ya boss beautiful pix and excellent narration..it is amazing how some people manage to keep in touch with their roots..hats off..and buddy...thanks for passing by ya..cheers n wishes

Good one Amrit and nice pics! Btw the theme they had selected for this past year was different forms of Bhakthi. I felt bad i had missed the displays for all these past years!!!

Very beautifully narrated. I have been to couple of Golus, normally it is women only event. Next time I will definitely take a more closer look at the dolls and event.

Good article with nice pictures. Brought back my child hood memories. I am from Mysore. My Grand Father was a freedom fighter and displayed the beautiful dolls of Gandhi, Nehru, Subhash Chadra Bose and others during those 9 days. A small correction - the demons name is Mahishasura. Here is a nice story about him on wikipedia - http://en.wikipedia.org/wiki/Mahishasura.

Satish, I did not know that you are from Mysore. Thanks for the correction. It is a spelling error I made. My friend lives here in Cary and they do it every year. Let me know if you want to join me this year.

Beutiful work....putting pics along with the information..i wasnt knwoing about Doll festival....thnx for sharing it...
and thanx for visiting my Blog...
hope of frequent visit ...

Thanks Rohini. I am glad you liked it.

Thanks 'A' for travelling 'down the memory lane' in my blog. As it was an old one, I saw your comment only now... and could visit the "kolu".. US is a good sanctuary of our culture now.. thanks to the emigrants!

Wonderful post...Amazing display of Navaratri Doll festival by your friend...Are these all set ups from one single family? Each set up is done with nice creativity and dedication. Superb work...Those two Tulsi plants are so well grown.Pleasant and auspicious glimpse...Thanks for sharing with us.

I think, I have read it, maybe not commented on it. It is really beautiful display of dolls. I have put the link.
I am sure this Saturday you and your family will really love the display in your friend's place, and also enjoy the prasad called Sundal very much.
Happy Navaratri!